In another life we must have been explorers. Just as Christopher Columbus found the Americas while trying to find India, we stumbled upon the Hawaiian Paradise Beaches while trying to find the lighthouse. The Beaches are not the paradise they sound like. Instead they are nothing but lava fields that jut out into the ocean where the waves crash against them with an unmatched ferociousness. 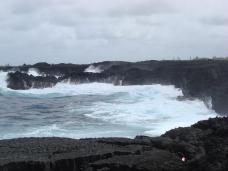 While following the coastline, after crossing 4 wheel drive only lava fields and driving through a flooded road, we also happened across Isaac Hale Park. There we were able to catch a few glimpses of surfers taking advantage of the incoming tide. 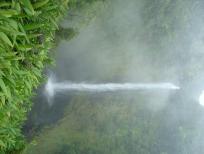 In the morning before our jaunt in the Jeep we headed to Akaka Falls. Akaka Falls drops more than 400 ft in a lush jungle atmosphere. It is on a half mile trail together with Kahuna Falls which provides several overlooks and viewing areas.

Today was a great way to conclude our stay on the Big Island. We caught our flight to Maui and arrived shortly after 7pm. We grabbed the rental (Yellow Ford Mustang Convertible yeah 🙂 ) and began our adventures on the ‘Valley Isle.’