NOTE: This post was originally written on February 14th 2012 but for some reason was never posted until March 7th 2013

This trip has been great. We woke up this morning 2 minutes after a pair of deer left the yard, so that was a little disappointing. Just before lunch though, they came back with friends! Six of em less than 25 yards from the front of the camp. Needless to say Delilah was pretty ecstatic.

D and I spent a bit of time this morning playing in the snow. Snow angels, snow balls, falling down, running around, chasing the dogs with piles of snow, all good fun. It was pretty nice to come inside to the stoked up fire and warm up, a lot different than the little camp with just the gas stove.

After naps we headed to Saranac Lake for the end of the carnival fireworks and to check out the ice palace. The plan was to check it out, grab a bite to eat and then watch the fireworks. However; it was way too cold to stay much longer so we headed back to camp with about an hour and a half until the fireworks display. Next time we’ll probably come after dinner so we’re there just before the slideshow/fireworks.

NOTE: This post is old, it was originally written on February 14th 2012 but for some reason never posted until March 7th 2013

Our first family trip to the mountains has been a success so far. Rachel still has a week before she goes back to work so we’re in the mountains taking advantage and spending a long weekend with the family. The ride up was relatively uneventful although it did take us an extra hour and a half tiger going, and the trip itself took an extra hour due to required stops. All to be expected with an infant and a toddler dragging along so I call that a success!

It sure is nice having a lot more space at camp. We wouldn’t have been able to do it with both kids, both dogs, both of us and my father in the little cabin. Now we have a bedroom to spread out in and the kids have a living room and dining room to spread out in. I put it that way because Delilah’s at the age where that’s essentially how it go’s.

We mostly just spent the day relaxing in the cabin in the woods. Dad and I picked up a bit of wood in the morning, and even managed to kill a porcupine in one of the traps he has set around diamond. He’s trapped 7 so far in the past week. Not too shabby.

After naps we took a quick trip down the road to see some family. Was good to catch up with cousins and let Delilah play. She had a blast running around playing with the cars, trains, animals, miniature babies and other toys. Her favorite parts were a sort of red light/green light game she played with her cousins, as well as the typical dance party she likes to throw these days.

Tonight the sky is so clear the temperature is gonna drop most likely to below zero. This is by far my favorite time of the year to be in the mountains. With the snow on the trees and such clear skies you don’t even need a flashlight outside. It’s beautiful and usually makes for great riding conditions in the morning.

Delilah seems to like the snow almost as much as Rachel and I do. Every time the snow starts to fall she exclaims “I see the snow! So pretty!” and a little piece of me smiles.

I can’t wait for more trips like this. I feel so lucky we have a place to go to anytime we like. I look forward to when Reece can run around an enjoy it as much as Delilah does now.

Drywall is up, paint is on, electric is in, stove is working, wall is open, furniture is moved, cabinets are in, siding is up and stained, bedroom doors are stained, floors have been stained. 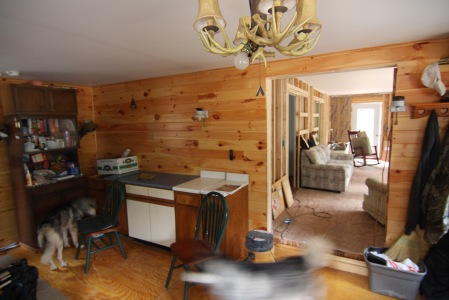 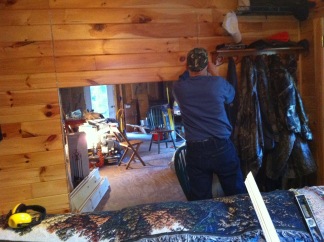 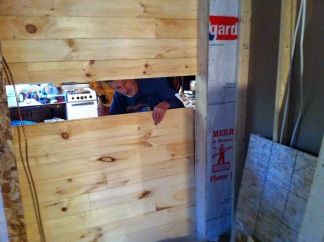 Lots more to do though.

The great news is though, the furniture is partially in and the addition has been opened to the old camp so now there’s space!

Can’t wait to get back up there and enjoy it.

We were able to get the rooms framed in and prepped for electric and insulation. Now the real work can begin. Looks like we might just be able to make it usable this winter after all.

On the vacation side of things we had some fun.

All in all it was a great week. Love getting to spend some quality time with our family.

UPDATE: Since this post was written a month and 1/2 ago and just posted today… more progress has been made on the camp. The insulation and electric work is complete, all corners/windows have been framed with rough cut (and painted) 2×4’s and the siding is going up.

The new 2012 Polaris snowmobiles were just announced and I couldn’t be less disappointed. I’d love to trade in or sell my 2006 Supersport so I could get a liquid cooled two-up trail machine that gets good mileage but it’s not gonna happen. 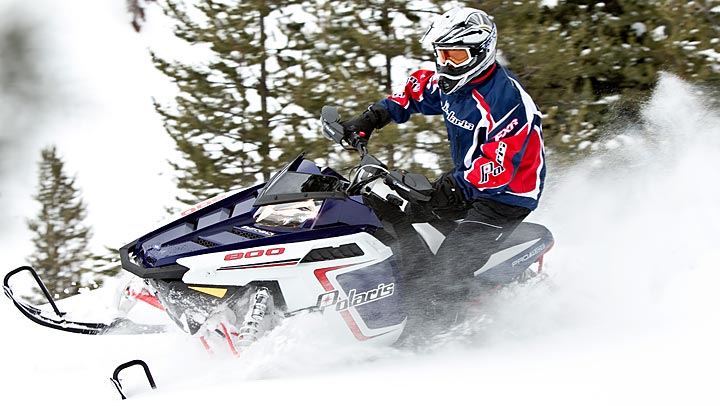 The new sleds are just plain ridiculous. They’re either one-person snow-cross machines with no protection or they’re giant behemoths with all the amenities of a Cadillac. Almost every model is $10k or more and the trail cruisers are all but gone. The new machines have almost no resemblance to the sleds of old, like the 1974 colts my parents bought and rode all over the adirondacks and to camp miles into the back country (pictured).

Our family has always stuck with Polaris and they’ve always been beautiful machines. That might need to change now. There’s no way I’m spending $10k on a snowmobile. Skidoo makes a nice 600 with a two-up seat, a larger windshield and better mileage for about $7k and even that seems ridiculous. 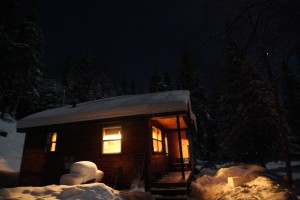 There’s nothing more welcoming than a warm and cozy cabin at 21 below in the mountains.

We’ve only made it to camp once this winter so far for a few reasons but the weekend we spent there was a beautiful (cold) one. The second night the moon was shining so bright it was casting daylight like shadows. The next morning we woke up to -21° which was easily explained by the clear skies and bright moon.

Even in the brisk -21° degrees and the middle of 4ft of snow, the camp always offers a nice warm zone of comfort, and sights like these are some of the top reasons I love being in the mountains in the winter.

A few weeks ago my friend Brian and I headed back up to camp to get the Soffit and Facia in place to seal up the addition on our camp for the winter.  We made some excellent progress on Saturday with the soffit started on the front and finished on the end.  However; Sunday we ran into some nasty weather and what should have only been a few hours worth of work turned into an entire day of sloppy wet mess working right under the overhang dropping a full 12×26+ square area of water right on our faces the entire day.  It was fantastic.

Brian was a trooper though and we toughed it out, managing to get everything installed except the last 2 pieces where the addition meets the existing roof. The rain wasn’t letting up and those pieces need a bit of measuring and figuring, not to mention a larger piece of tin than what we had.

It’s coming along nicely though, and I think I’ll be back up there soon to finish ‘er off.  Provided we get some decent weather (not rainy, cold or snow I can handle) the rest shouldn’t take more than a couple hours solo or not.

I’m hoping maybe my dad will be able to make the next trip just to look things over, but we’ll see.

Every home needs a Camp Chair whether it’s your primary residence, vacation home, RV or your cabin in the woods. The camp chair should be warm, cozy, well loved, big, green and a tiny bit of smell doesn’t hurt either. It should immediately make you sleepy, or at least make you contemplate a nap. It should have a nice view of the fire and be in close proximity to it so as to add warmth to make you sleepy. It should have memories, and it should be not just yours, but everyone’s favorite seat in the house. It should never stay unoccupied for long because someone else will surely be along to slumber in it.

I’ve had 2 previous camp chairs in my life and both fit that description perfectly. We just recently added a lazy-boy recliner from Rachel’s grandmother’s house to our living room and it immediately struck a chord. It’s brown not green but it’ll do nicely.

The really fun part though is planning the camp chair for the new addition on our camp. I think I have a perfect spot picked out we just need to find the chair.

My father hasn’t been able to spend the time he wanted working on the addition to their camp. The past two weekends I’ve spent there finishing winter weather preparations with a whole bunch of help.  Thanks Jerry, Don, Alan, Tony & Amy.

It’s been a long time coming but we’ve now got a finished roof, weather sealed outer walls and windows and doors installed. I’d say we’re well on our way. The soffit should go up soon and then all that’s left is the doorknobs/locks and possibly some wire mesh under the camp to keep the critters out.

I might even get motivated enough to just continue working this fall so come this winter it’s at least partially usable space.

Anybody got a good propane space heater? 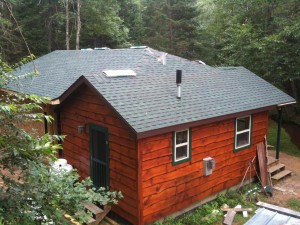 Dad, My good friend Anthony and I spent 3 days up at camp last week, getting the roof in tip top shape. My Uncle Jerry stopped by on Monday and helped all day while we finished placing the end cap and prepping the roof for shingles.

The three of us then shingled the entire roof in a day and a half. Up to the ridge cap anyway, at which point we had to head home. Not too shabby. Next trip up the plan is the ridge cap and the remaining OSB wallboard. At that point we’ll be ready to place the Tyvek wrap, windows and doors. We might even get to some of that, depending on how long we’re up there for.

It’ll be nice to get ‘er sealed up.

Thanks to Anthony and Jerry. We wouldn’t be anywhere near as far along without all the help. You guys rock!