Drinking and Star Wars all with a DD? or my wife rules part deux? Awesome. 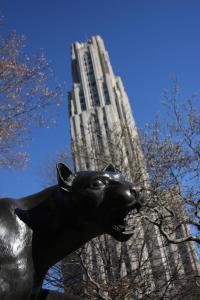 Rachel and I went to Pittsburgh for Star Wars in Concert a few weeks ago.  Before we went I learned a little about the city because, honestly, I knew nothing.  Pittsburgh is in the middle of the mountains? Why did I not know this?  It’s only 4.5hrs away.  Really? Why have I not been there before? It takes longer to get to Camp sometimes (driving up route 81 across the Tug Hill Plateau in the middle of the winter is no fun), and we go there almost every weekend.  It’s easy to get to also, just take Interstate 90 to Interstate 79 south right into the city.

We stayed at the Wyndham Pittsburgh University Place which we highly recommend, partly because of the quality of the accommodations at their price, but mostly because they include a DD.  They have a shuttle which takes you anywhere within a 5 mile radius every hour on the hour.  Our car didn’t move once we got there until we were headed home which was nice. 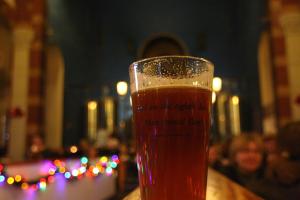 First thing we did when we got there?  We headed to the only place (I know of) where you can get your drink on inside a Church, the Church Brew Works.  A little silly for Rachel, but they served an excellent dinner too!  Surprisingly enough, on top of the great atmosphere, their beer and their food were amazing!

A few suggestions from our list of favorite spots for when you go to Pittsburgh.  Be sure not to miss the Monongahela Incline, it provides simply stunning views of the city and it’s cheap.  Or you can just drive to the top of Mount Washington, but what fun is that?

Pittsburgh might be the only place in the world where you can see a real live Transformer, or at least a sculpture of a fake transformer named Arch.  Don’t miss that while it’s there. 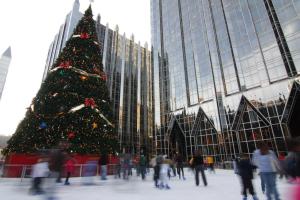 The ice rink at PPG Place looks like another Rockefeller Center amidst a beautiful crystal (glass) Palace (office complex).  You can rent skates and skate amongst the palace towers around a ginormous Christmas Tree.  Unfortunately we didn’t discover it until a few minutes before the concert or else we would have partaken.

Our favorite part of the trip was (obviously) the reason we were there. Star Wars in Concert was amazing! What an interesting new way to experience the Star Wars story.  Narrated by none other than C-3PO himself (Anthony Daniels) and performed by a live orchestra.  Hearing the Imperial march live along giant HD images of Vader raised the hair on the back of my neck.  Yes, before anyone asks, there were lots of people in costumes around (I sat next to Obi-Wan) but no, we were not among them.  Overall we’d highly recommend the whole Star Wars in Concert experience. 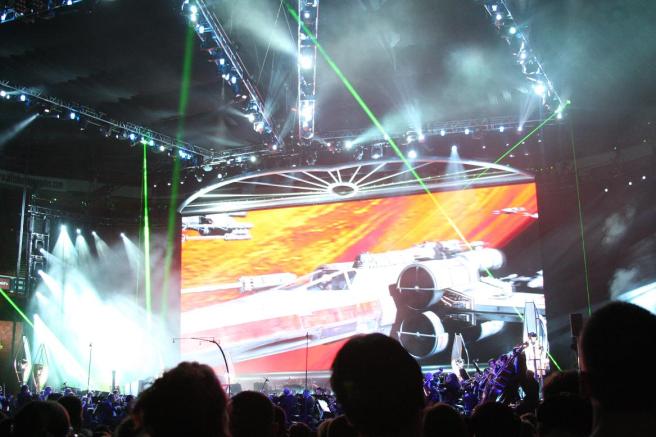 An incredibly enjoyable weekend.  Pittsburgh is an awesome city and we WILL be back.

2 thoughts on “Pittsburgh is an Awesome City”