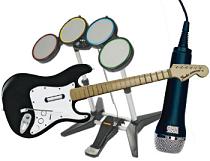 When Rock Band came out a few weeks ago I was excited to try it out. Luckily my good friend Brian bought it and invited me to try it out. Ever since we’ve been meeting once a week as Melted Banana Hand. My impressions?

It’s more of a game than any of the Guitar Hero’s. Rather than a playing a list of songs and then being done, the idea is that you tour as a band. You will end up playing the same songs more than once but that’s ok because of how it’s done. Instead of finishing a song, your objectives are finishing a set list or finishing a venue. Because of the structure of the game it is also able to incorporate downloaded songs into the game itself rather than just adding it to a list of playable songs in quick play mode like in Guitar Hero.

Solos are new to the game. For guitar this simply means added points and most likely faster sections with more notes. For drums this means you can play anything you’d like, which means a lot of fun. For vocals you can say anything you’d like. The solos in the game create a new and very dynamic musical environment.

The drums are impossibly hard. The guitar in Guitar Hero wasn’t easy to begin with but with some practice it got much better and was completely playable on hard. The drums on Rock Band are a completely different story. It’s hard on easy and insanely impossible on medium. Anything beyond that is just crazy talk.

Melted Banana Hand is still meeting once a week and the vocals are always up for grabs considering my friend Brian and I can’t at all. If you’re interested just let me know and I’m sure we can find a spot for you.