“what was I thinking?”

This one tops the cake, but it happened a long time ago so don’t worry, it’s just a tale of what could have been and almost was.

It was July 25th, the weekend of the democratic national convention in 2004 (Where Barack Obama was to speak ironically enough). My good friend (and roommate at the time) Brian and I were on our way to Boston to see some friends for the Whiskey Company BBQ. We were driving my stupid (pseudo) pimped-out cavalier (pictured at the Grand Canyon). Tinted windows, sound system, headlight covers, mirror-tint Chevy symbols in the rear windows, you get the idea. At about 1:30 in the morning on an empty 6 lane highway somewhere near Boston we got pulled over.

This cop came out of nowhere. I still don’t know whether he was in a turn-around watching for cars or whether he was just driving along. Either way he came up on us at about 90Mph lights blazing. I pulled off to the side thinking he was headed to some emergency but no he pulled up right behind us.

“Sure thing” I answered while fumbling in my glove box. As I handed them over I politely asked, “Is there something wrong officer?”

I know everyone says they weren’t doing anything wrong but in this case we really weren’t. I couldn’t even fathom why he had pulled us over. He made some lame excuse about how we had changed lanes too quickly while passing a car and headed back to his car with my license and registration. This couldn’t have been farther from the truth since there was nobody else on the road. We hadn’t even been passed since being pulled over.

When the cop came back to my car it was the only time in my life he came back without a ticket. However he came back up on the PASSENGER side. He then asked for Brian’s license.  He handed it over without question.

The officer then proceeded to pester us both about “items we have in the car which he should be aware of”. After about the 8th time (no joke) I said “look, you can search the car if it’ll make you feel better”. He immediately responded “I’m gonna take you up on that, step out of the car please.”. wow, not the first and definitely not the last, but a BIG mistake on our part.

We’re just gonna stop there for a second, let you absorb this picture.

He comes back to us, twirling my baseball bat in his fingers. ‘What’s this for?’

‘baseball’ I say. not much else to tell…

To be honest I don’t even remember what happened after that. The next thing I remember is driving down the road thinking ‘holy shit what the hell was that about’.

It could have ended a lot worse. a LOT worse.

Don’t ever turn your back on the only evidence proving your innocence.

If you’ve done nothing wrong and a police officer is harassing you, call the local police department or 911. don’t just put up with it and think “holy crap” after the fact like we did. it might not end that well for you.

We were lucky, very lucky.

Since we had the whole day to ourselves on Friday we headed to the coast.  We weren’t the only ones in the group with the same idea so we traveled out there with Roger, Tess, Heather, Liam and Jill.

There’s another observation we made almost immediately upon arriving in Portland which we’ve failed to mention thus far.  There are beautiful wild flowers absolutely everywhere.  They grow in fields, by the road and between the sidewalk cracks, literally everywhere!  On the way to the coast we found this really neat little fruit and flower stand where you could pick your own flower bouqette (as many as you could fit between your pointer finger and your thumb) for $5.  Rachel says this is a fantastic deal and I tend to agree (since I know what it costs to buy her a dozen roses…).  They had some good deals on Raspberries and Blackberries also so we picked up a quart of each for $3 a piece. Rachel says there were shasta daisies, spray roses , hydrangeas, lavender, fox glove and many more, although I only know them as the purple, red and yellow ones. 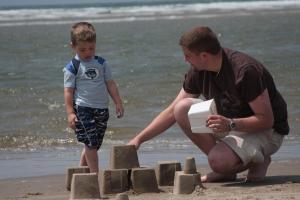 From there it was on to the coast.  We arrived at Cannon Beach starving so we stopped at the Ecola Seafood Restaurant & Market and had our first Seafood of the trip.  It was delicious!

We had Liam with us and this was his first trip to the Pacific Ocean (I think it was his first trip to any ocean but I’m not sure).  His goal? to build the greatest Sand Castle the world had ever known.  We didn’t exactly fly to Portland with sand castle construction on the mind so we didnt’ have any tools with us and neither did he.  Fortunately, Roger came up with the idea of using the ice bucket & cups from the hotel so we snuck them along.  When Liam found out what we had, he was ecstatic.

We ended up spending so much time at Cannon Beach building sand castles and exploring Haystack Rock we didn’t make it any further.  We had to head back for George & Stacie’s BBQ.  Since it wasn’t really that far out of the way, we headed south along the coast to Tillamook and then took route 6 back into Portland.  This is a beautiful drive so if you get the chance be sure to take it.  Some of the best Scenery we’d seen so far.

That night George and Stacie hosted a great BBQ with friends and family where everyone got to relax, have some good food, good drinks, enjoy great company and play some beanbags and wiffle ball.  An enjoyable and relaxing way to prepare for the wedding on Saturday.

For my birthday Rachel organized a surprise party by tricking me into a dinner at Dinosaur BBQ.  It was a load of fun and completely unexpected.  It was my first surprise party and I’d call it a success.

To top off the great BBQ dinner at Dinosaur Rachel got everybody together for the Cake concert.  Cake is one of my favorite bands and she had been making excuses for why we weren’t able to go.  When I opened my birthday card at dinner and found 2 tickets for the concert I was ecstatic.  The concert was better than I could imagine.  Cake turns out to be one of those bands that sounds just as good if not better live than on their pre-recorded music.

An awesome birthday thanks to the worlds best wife.

Another early start to a long day, but here that sort of day is welcomed. At 7am this morning we caught a ride on the leilani. She was a charter boat serving those interested in snorkel, snuba or just enjoying a ride on some of the most beautiful waters mother nature has to offer. It first took us to Molokini, a half sunk crater islet. It’s a popular snorkel spot with clear waters, a thriving reef and an abundance of aquatic life. We suited up and headed out to try our luck with the funny goggles and somewhat fishy breathing apparatus. The object of the game was to stick your head face down in the water and see as many fish as possible before swallowing too much sea water that unavoidably was sucked down the spout of your snorkel. It was amazing though. there must have been at least 50 different species of fish down there, some getting close enough you swear you could reach out and touch them. it was a good call buying that underwater camera. you’ll have to wait for pics from that till we get home.

Next we ate a BBQ lunch prepared by the ships crew and headed to Turtle Town. Here we tried Snuba, a combination of snorkeling and scuba. really it was scuba diving with a tank on raft above you instead of on your back. It took a little while to get used to the breathing but once we did it was great. We are both in agreement that snuba kicked snorkels butt. Once in the water it took no time at all to see a turtle. As matter of fact one was waiting to greet us right off the ship. We saw two others that day and again were able to get pretty close. these guys aren’t shy. we don’t dare touch them though. sea turtles are a protected species and you could get fined up to 2000 if caught touching one. we left turtle town and it was back to Maui.

when back at the hotel we decided to catch up on some relaxation. we rented a cabana on the beach and sipped pineapple juice and coconut rum cocktails till sunset. This is the life.